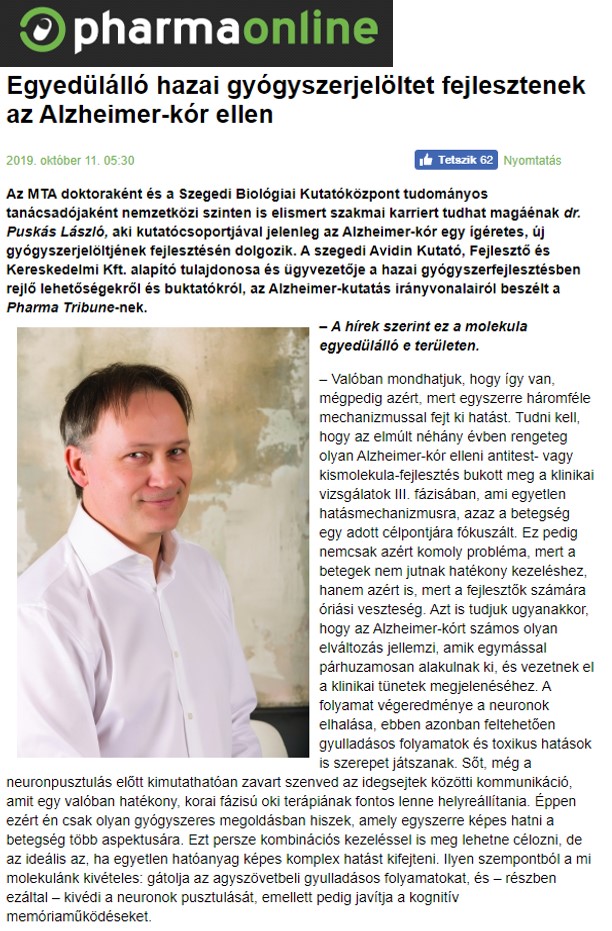 It has three mechanisms of action on important pathways of Alzheimer’s disease at the same time. In the last few years, there have been many developments in antibody or small molecule development against Alzheimer’s disease. All of these focused on a single mechanism of action, a specific target of the disease and failed in Phase III clinical trials. This is a serious problem not only because patients do not get effective treatment, but also because of a huge loss for developers. However, we also know that Alzheimer’s disease is characterized by a number of lesions that develop in parallel and lead to the appearance of clinical symptoms. The end result of the process is neuronal death, but inflammatory processes and toxic effects are also likely to play a role. In fact, even before neuronal destruction, the neuronal communication is noticeably disrupted, which would need to be restored with a truly effective, early phase and targeted therapy. Therefore, we believe in a drug solution that can simultaneously affect several aspects of the disease. Of course, this could be achieved by combination therapy, but the ideally a single active ingredient can produce a complex effect. From this point of view, our molecule is exceptional: it inhibits inflammatory processes in the brain tissue and, in part, prevents neuronal destruction and improves cognitive function.

At the kick-off meeting partners had short introduction of their companies, presented research activities and their special focus of investigation. Later the MITOME work packages were discussed along to the organization of the samples, plan for the reports and future cooperation. Early data were presented also.

Any cookies that may not be particularly necessary for the website to function and is used specifically to collect user personal data via analytics, ads, other embedded contents are termed as non-necessary cookies. It is mandatory to procure user consent prior to running these cookies on your website.