Dextran sulfate sodium (DSS)-induced colitis is one of the most common models of chemically induced colitis in mice. Orally administered to mice initiates a lethal inflammatory bowel disease (IBD) that resembles human ulcerative colitis. Epithelial cell toxicity, increased intestinal permeability, and macrophage activation have been suggested as possible explanations for the deleterious effects of DSS although the mechanisms are not well understood. Intestinal microflora can also play a role in the development of the disease. During DSS treatment, the disease is characterized by colonic epithelial cell lesions and acute inflammation with neutrophils and macrophages present within damaged segments. Clinical symptoms include diarrhea and bloody stool. Anti-TNFa antibody treatment has been shown to be of significant benefit in DSS-induced colitis.

Mice are continuously exposed to water containing 5% of DSS. The exposure to DSS lasts for a week. Based on the occurrence of symptoms, mice start to get treatment. The candidates may be given to the animal prior to the exposure to DSS (to see if it has any kind of prophylactic effect); while the animals are exposed to DSS; or after the colitis is present, to see whether the candidate has an anti-inflammatory effect.

Following DSS treatment, mice develop a chronic colitis characterized by inflamed areas (like erosions), crypt distortion, florid epithelial proliferation and possible dysplasia. Early histologic changes include progressive loss of the crypt which results in erosions by day 5. The earliest changes are very focal and not associated with inflammation. Inflammation occurs secondarily after erosions appear; acute clinical symptoms (diarrhea, hematochezia) are associated with the presence of erosions and inflammation.

The results can be analysed by the following methods:

Carrageenan is a strong, irritant chemical that stimulates the release of inflammatory and proinflammatory mediators, including bradykinin, histamine, tachykinins, reactive oxygen, and nitrogen species. Typical signs of inflammation are edema, hyperalgesia and erythema.

Generally, animals are injected with a certain concentration of carrageenan in one hind footpad, while the other footpad is injected with saline as control. Usually, half an hour or an hour later they are treated with the test compound. Assessment of paw volume/thickness is performed at specified time points.

Drugs candidates can be administered by oral gavage, subcutaneously, intramuscular, intraperitoneal, and intravenously.

Inflammation induced by carrageenan is acute, nonimmune, well-researched, and is a highly reproducible test. Cardinal signs of inflammation — edema, hyperalgesia, and erythema — develop immediately after the subcutaneous injection of carrageenan. The inflammatory response is usually quantified with the increase in paw size (edema), which is the biggest after the sixth hour of the injection.

In case of studies focused on the early (6h) and late (72h – 96h) inflammatory responses, edema can be measured every six hours with a caliper, and by weighing the paws (self-control studies) at the end-point. Upon request, myeloperoxidase (MPO) activity and histopathology can be performed as well. 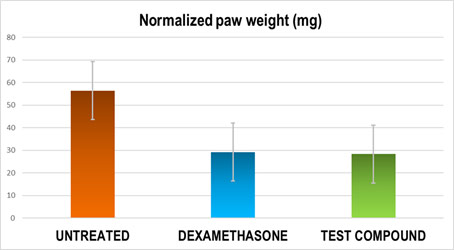 The collagen-induced arthritis (CIA) mouse model is the most commonly used autoimmune model for rheumatoid arthritis.

In this model, autoimmune arthritis is induced with an injection containing an emulsion of complete Freund’s adjuvant and type II collagen.

Typically, the ﬁrst signs of arthritis appear 21 — 28 days after immunization. Arthritic hindlimbs and forelimbs are severely swelled in mice after being injected with collagen.

Edema can be easily measured with a caliper. For identiﬁcation and evaluation of arthritic limbs, it is a good practice to examine each limb of each mouse 2-3 times per week. Upon request, histopathology can be performed.