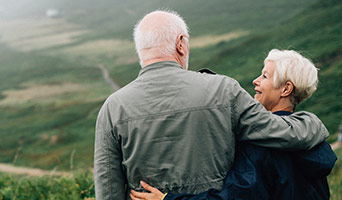 Avidin has synthesized more than 150 Q analogues and tested them in vitro for cytoprotective effects. The clinical candidate enantiopure Q134R has been produced in kg quantity under GMP conditions with good purity profile by SONEAS Research Ltd (Budapest, Hungary). The potassium salt of Q134R is stable in both powder and formulated form (capsules). Two families of follow-up compounds were also synthesized.

Q134R exerted strong cytoprotective effects on neurons and astrocytes in peroxide induced cell death assays at 100 nM range; it recovered mitochondrial membrane integrity as well. Q134R prevented hippocampal neuronal death against oligomeric Aβ toxicity in vitro and in vivo (4 mg/kg oral dose resulted in complete recovery of synaptic proteins and short-term memory in mice). Q134R recovered cognition in scopolamine-induced mouse amnesia model, while it had no effect in GABA-Ag KO mice. One and three weeks long daily treatment of 2xTg (PSE/APP) mice resulted in normalized Y-maze scores. Positive effects of Q134R on synaptic function and strength were determined by electrophysiological recordings. Detailed ADME-T was finished. The in vivo micronucleus test and the Ames test were negative. The cardiovascular effects, the Functional observational battery in CNS and the effects on the respiratory function proved the safety of the drug. Subchronic and chronic toxicity studies revealed no toxic side effects (52 weeks, non-GLP, in mice).

Detailed CEREP profiling on 178 targets in the Diversity profile and targets related neuroprotection revealed clean profile with specific inhibition on NFAT activation in submicromolar concentration. Later, the calcineurin independent inhibition was confirmed, hence no immunosuppressive side effects are anticipated. Inhibition of NFAT nuclear translocation was proved in 2xTg mice after the oral administration of Q134R. The compound inhibits HIF1α protein degradation which results in the activation of cytoprotective genes. The enantiomer-specific GABA-A channel modulation on specific interneurons was verified at nanomolar concentrations. This effect is responsible for the potent nootropic effects of Q134R. 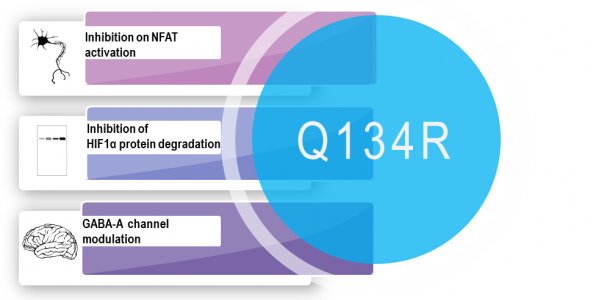 The main proposed indication of Q analogues is Alzheimer’s disease. Our new analogues showed impressive effectiveness in other indications as well (cytoprotection against oxidative damage, anxiety, and depression). However, the application could be wider than what cellular and animal studies currently suggest­ — including other neurodegenerative diseases.

The Phase IA first-in-man clinical trial was granted by the National Institute of Pharmacy and Nutrition (OGYÉI). The study was started with 20 healthy volunteers, 1+4 subjects per dose cohort (4-8-16-32 mg) in single-arm blinded arrangement. The absorption of the drug was fast (Tmax: 2h) and the plasma level of the drug slowly decreased up to 7h. Plasma levels were proportional with the administered doses. The drug candidate proved to be safe in the checked dose ranges.

Based on in vitro and in vivo pharmacological results, the advantageous ADME-T properties in animal studies and the good safety and PK properties in Phase I human studies concluded that Q134R is a promising drug candidate with multiple mechanism of action for the treatment of neurodegenerative diseases.