Laboratory mice are commonly used in animal models for cognition studies –  several of which are offered by us. These tests consist of administering drugs to mice and then testing various aspects of their behavior that reflect cognitive functions (like memory, spatial learning, social interactions, anxiety and depression).

The Y maze is a widely used behavioral test in preclinical research for studying spatial and short-term memory and learning. This test is commonly used to evaluate the alteration of behavior and working memory via measuring the willingness of rodents to explore new environments. Rodents typically prefer to investigate a new arm of the Y-maze rather than returning to one that was previously visited. Several parts of the brain (e.g. hippocampus, basal forebrain or prefrontal cortex) are involved in this task. Drugs (e.g. scopolamine) can be used to impair the memory of the mouse since they mimic different pathological changes. The scopolamine induced amnesia in Y maze test is applicable for the testing of drug candidates that presumably improve cognitive and memory functions.

Our system consists of a Y shaped labyrinth with non-transparent plastic walls a camera attached to a computer with EthoVision XT 9 software.

Over the course of multiple arm visits, mice should intend to enter a less recently visited arm. The number of arm entries and the number of triads are recorded, and the percentage of alternation is calculated. This test is used to quantify cognitive deficits in scopolamine treated mice and to evaluate the effects of novel chemical compounds on cognition. 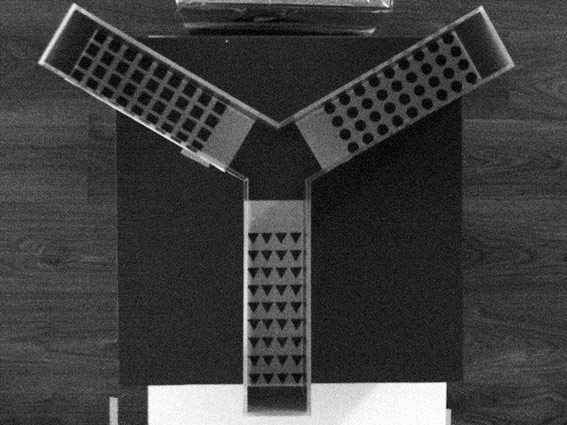 Our non-reflective maze is ideal for automatic video tracking and easy to clean.

The Novel Object Recognition (NOR) test is used to study cognition, mainly recognition memory, in rodent CNS disorder models. Rodents have an innate preference for novelty; thus, a mouse that remembers a familiar object will spend more time exploring a novel object. This test measures the spontaneous tendency of rodents to spend more time exploring a novel object than a familiar one. The choice to explore novel objects reflects the use of learning and recognition memory. We conduct the Novel Object Recognition task in an open field arena with two different kinds of objects, which are generally similar in height and volume, but are different in shape, color and appearance. Our tests consist of three simple sessions: habituation, training (with two identical objects) and testing (with one familiar and one novel object). During the habituation session, animals are allowed to explore an empty arena. Twenty-four hours after habituation, animals are exposed to the familiar arena with two identical objects placed in an equal distance. Two hours later, the mice are allowed to explore the open field in the presence of the familiar object and a novel object in order to test recognition memory. The time spent exploring each object and the discrimination index percentage are recorded. This test is useful for studying impaired cognitive ability in mice after e.g. scopolamine exposure and evaluating novel drug candidates for their effect on cognition.

Our system consists of a standard open field arena with two familiar and one novel objects and a camera attached to a computer with EthoVision XT 9 software.